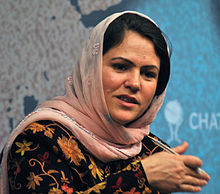 Fawzia Koofi is a Nobel Peace Prize Nominee, an Afghan parliamentary lawmaker, accomplished author, and internationally known outspoken advocate for the rights of democracy, women and children. She is the first female in the Afghan parliament to be elected as Second Deputy Speaker, and she heads the parliament’s Women Affairs Commission. Not only has Koofi humanized the otherwise faceless international discussion of the struggles and abuse of Afghan women, she is on the forefront of educating the international community as to the consequences for her, and other advocates of reform should the international community and their security forces be withdrawn.

Koofi started her political career in 2001 when she began to promote a “Back To School” campaign targeted at the rights of women in Afghanistan to an education. By 2002 she took employment as a Child Protection Officer with UNICEF, and in 2005 she was elected as a parliamentary representative for Badakhshan province, her native region in the rural mountains of northern Afghanistan.