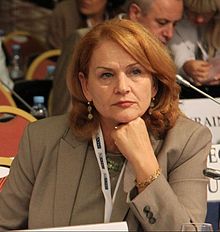 Arta Dade is an Albanian politician and former member of Parliament for the Socialist Party. She served from 1997–2007. During her political career, she held several government posts such as Minister of Culture and Minister of Foreign Affairs, being the first women to be appointed as a Foreign minister. She is currently Chairwoman of the Committee on Foreign Policy.

Dade was born in Tirana. She graduated from the University of Tirana in English Literature and has worked as a lecturer in the University until 1997, when she started her political career. She represents Fier County in the Parliament.